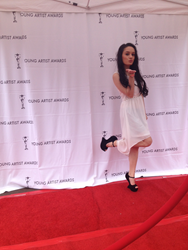 “Being able to do what I am most passionate about is beyond surreal and is an everlasting dream come true. I hope to inspire others to always follow their dreams!” Alexis Joy

The Young Artist Award (originally known as the Youth In Film Award) is an accolade bestowed by the Young Artist Association, a non-profit organization founded in 1978 to honor excellence of youth performers, and to provide scholarships for young artists who may be physically and/or financially challenged.

First presented in 1979, the Young Artist Awards was the first organization established to specifically recognize and award the contributions of performers under the age of 21 in the fields of film, television, theater and music.

The 1st Youth In Film Awards ceremony was held in October 1979, at the Sheraton Universal Hotel in Hollywood to honor outstanding young performers of the 1978/1979 season, and has been and is an annual event since then.

Celebrity news correspondent,Alexis Joy, creator of alexisjoyvipaccess.com, will be poised on the red carpet for the 36th annual event, March 15, 2015 at the Empire Ballroom, Sportsmen’s Lodge Hotel in Studio City, California. AlexisJoyVIPAccess is known for her unique style in capturing the best of young and upcoming celebrities, posts current interviews and promotes their projects. Having been recognized internationally, AlexisJoyVIPAccess has covered prestigious events such as Vidcon 2014, the 2014 Nickelodeon HALO Awards, LA Fashion Week, DigiFest LA, movie premieres and now, the Young Artist Awards.

Belegenza Natural Hair Care is proud to support AlexisJoyVIPAccess by providing hair care gifts for her guests as she fulfills on advocating the vision and mission of the Young Artist Foundation, encouraging young talent and raising scholarship funding for those with challenges that may have prevented young artists from pursuing their careers. In parallel efforts, Belegenza supports AlexisJoyVIPAccess, a rising star in journalism, in celebrating and forwarding the careers of her talented peers of the young artist world, who are pursuing their legendary careers!

Congratulations to the nominees, award winners, correspondents, and all associates and benefactors of the foundation, who support this auspicious event and the efforts of the Young Artist Foundation.